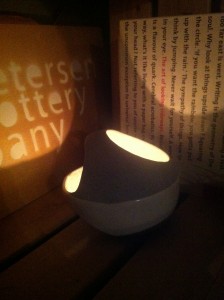 Petersen Pottery Company launched in May 2012 as a brand representing the ceramic work designed and produced by Sara Carlson.

Petersen has multiple studio sites in Southern California. Each piece is made with cone 10 (high-fire) stoneware clay and glazes that are highly durable, dishwasher and food safe.

January 2014 Designer Joshua Klein & Chef Jason Fullilove has selected our counter plate, fire table & baby bowl + a new small dish -all brown body, glazed in our whiskey blue-for their new spot on the Malibu Pier. We are thrilled to be working with all these exceptional chefs and very excited about our new venture with Chef Fullilove and the Malibu Pier team.

/update March 2014, with custom stamp in hand we will be impressing select pieces for the Malibu Pier collection with the MALIBU PIER logo, let the countdown begin!

December 2013 Chef Gary has returned with rave reviews on the performance of his Counter Plate and has requested two smaller plates for his upcoming permanent location at the Normandie Hotel.

/update March 2014, getting ready to glaze the collection and execute final firing, bringing the clay to full maturation. The glaze hardens in the final fire for a more durable body + decorative layer creating a glass like coat over the stoneware clay. This firing is a one -two week cycle and yields anywhere from 1-24 pieces per firing.

July 2013 Petersen is in production on plates, bowls and table service ‘pourers’ for Chef Matt McCallister‘s FT33 in Dallas, TX. A  beautiful grey finish has come out of our relationship as well as a funky & functional pourer.

/update March 2014 we are finally sending out the final box of goods to Chef!

Petersen Pottery is carried at beautifully curated stores such as:

MRKT SILVERLAKE /Silverlake, CA /one of a kind pieces

Hammer and Spear /Downtown LA /one of a kind pieces

OTHERWILD  /Echo Park, CA /one of a kind pieces

June 2015, Little Whiskey Collection in group show “Fired by Junzo” at Burbank Center for the Arts

Dwell on Design 2014  Potted will be selling a variety of sizes of our Nantucket Collection both in classic and midnight plus some Hastings Vases!

”Sara Petersen is one such artist making one of a kind clay pieces. Her passion and enthusiasm for small batch pots, unique glazes and attention to detail is on display when you meet her, and in her work!”